By Omer Yacine
Summer of Bitcoin '22

Lightning Network (LN) is a layer 2 protocol on top of Bitcoin. It fixes Bitcoin's scalability issues. Bitcoin at the moment can process ~7 transactions per second (which can never serve 8 billion people :v)

LN on the other hand can process ~1M transactions per second. This is because lightning transactions don't make it to the blockchain, they happen off-chain (except the ransactions for opening and closing the lightning channels).

With this setup, you should always watch the blockchain and never go offline or all your open channels are compromised. This is the problem watchtowers are for.

A watchtower is a third party service that keeps an eye on your lightning channels and reacts if they were breached (your channel partner tried to cheat on you).

How would they know if your channel is breached?

This is mentioned in details in BOLT 13 (still WIP). But basically, the client (one channel party) supplies the tower with all the information it needs to act upon any breach. The client also won't have to compromise their privacy with exposing penalty transactions to the tower. They can send it encrypted and the tower won't be able to decrypt it unless a breach has
actually occured.

The Eye of Satoshi

The Eye of Satoshi (TEOS) is a BOLT 13 compliant lightning watchtower written in Rust and was written in python before.

There is no docker image for the project at the moment not is it packaged, so you will have to build it from source. Install Rust from here to build the project.

The tower has recently got Tor support, which means the clients of the tower can interact with the tower over Tor for more privacy.

To run the tower, you need to:

With the tower being setup, you can interact with it using its http endpoint:

It's really hard to craft http requests and send it to the tower say using something like curl. There is an open PR right now that will add a new crate to the project, namely, watchtower-client. It is a Core Lightning plugin that will send your appointments to the tower in your behalf on each commitment transaction revocation.

This way, you can make your lightning transactions and go on a vacation feeling safe. That said, it's recommended to register with more than one tower and give them the same appointments. It's redundant but more failure proof.

Setting Up Your Own Eye

What will we be doing?

I will teach you how to setup your own Lightning watchtower TEOS (The Eye of Satoshi watchtower) and run it on a server on the cloud. A watchtower shouldn't ideally run on a personal computer, since at some point, you will shutdown that computer and a watchtower should never go offline. We will setup our watchtower on a cloud server so it never goes offline and put our open lightning channel in danger. The best place to deploy a personal watchtower in my opinion though is in a homelab or a personal server. But you shouldn't only rely on one watchtower. Use your friends' towers, let them use yours, and maybe subscribe to a third party one.

For this tutorial, we will be using Oracle Cloud. Oracle Clouds offers the best free tier I could find, and we want to spend as little as possible to get our service up and running.

Note that the service will be altruistic and available for anybody to use and not just you. TEOS doesn't charge users on the provided service as of now (care to help?). It's a lot fun anyways to let people use your stuff rather than using it alone. You can surely figure out a way to stop others from using your service if you want (e.g. put an authentication reverse proxy on the line), but I wouldn't recommend that.

Setting Up Our Server

We will setup our server on Oracle Cloud. You will need a credit card to register for the first time (and you will be charged and then refunded $1 US for security purposes).
You will be given the always free resources found here + $300 US for the first month. Our setup will, unfortunately, exceed the free resources limit so you will need to upgrade after a month (this is because the blockchain is about 500GB and the free tier limit offers a maximum of 200GB as of August 8th 22). A 1TB of storage with no disk optimization from Oracle will cost about $25 a month.

Once the account is setup, head to compute, then instances. 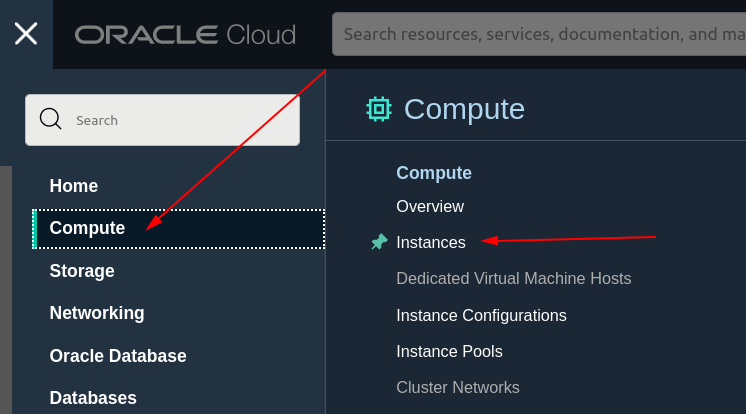 You will see a table like this, but with no running instances:

Our goal is to have an instance like micro with 1TB of storage to run the watchtower on the mainnet Bitcoin network. The mainnet is where real bitcoins are. There are also other networks like signet and testnet, which are for testing purposes.

Click Create instance to being creating the instance we need. Make sure to assign a public IP address for that instance so you and other people can reach it from all over the world. Also, you will need to Specify a custom boot volume size with enough disk storage for the mainnet requirements. We can also use block storage instead and have no disk optimization for a lower charge per month, but then we will have to manage many disks inside the server. Select the instance shape VM.Standard.E2.1.Micro. This shape has two threads, 1GB ram, and is included in the always-free tier.

You can use any OS image for your server, but the one I recommend is Ubuntu 22.04 (preferably the minimized edition since we won't need all that bloat anyways). Other Linux images might need some work to get Bitcoin and TEOS installed on them successfully.

Once you have configured and created the instances, go to the subnet settings and allow access to ports 22/ssh and 9814/tcp. Port 9814 is the default port on which the tower listens for user requests.

Now ssh to your server using the key given by Oracle while creating it: 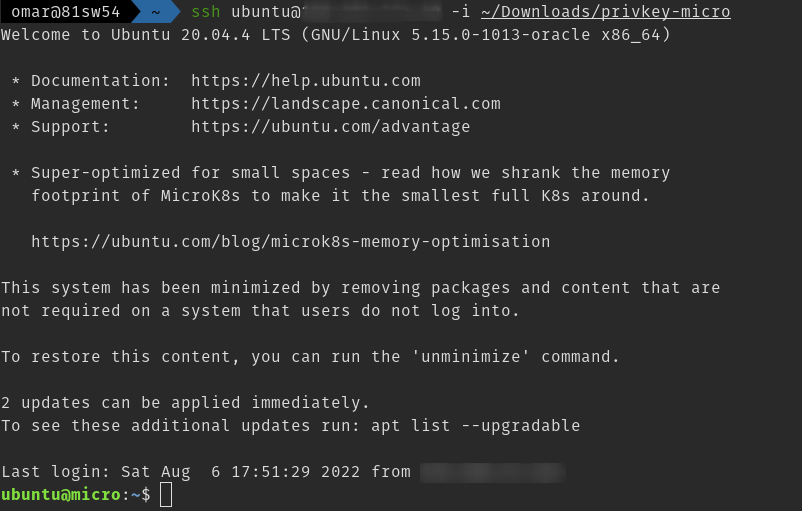 You might want to add some swap memory since the server might crash often with this low amount of ram. A 2GB of swap space would be a pretty solid choice:

If you run free -h you will see your swap space listed there.
Now the server is ready to host the watchtower ;).

TEOS depends on bitcoind so we will need first to download it. Head to bitcoin.org downloads page and choose a build for the machine you are using. For our micro Oracle Cloud instance we will use the x86_64 build: 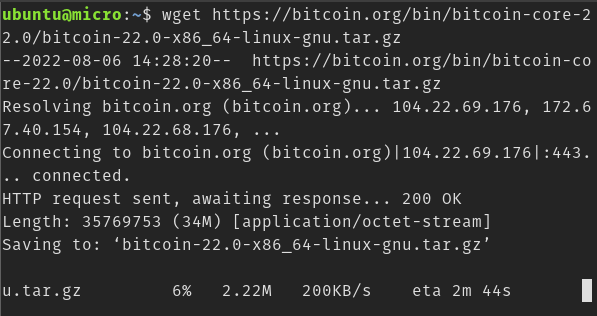 Now extract the binaries with this command:

Looks the same as the directory structure for /usr or /usr/local:

To install bitcoind on the system, copy the bitcoin-22.0 directory content to /usr/local:

Note: You need sudo because only root can write to /usr/local and -r for cp means to recursively copy the directories.

Now if you run bitcoind you will see this:

bitcoind now is successfully installed and running (Ctrl+C to stop it). It is downloading the entire blockchain which is about 500GB.
Right now, we can't use bitcoind with TEOS. Some configuration options are missing.
Create a ~/.bitcoin/bitcoin.conf file and populate it using the instructions found here.

You should create strong rpcuser & rpcpassword.

Now run bitcoind again and let it sync. It might take up to a couple of days for the entire blockchain to be downloaded. You can check the number of blocks downloaded till moment by runnig the command bitcoin-cli getblockchaininfo.

Setting Up The Eye

Then, run the following commands to install TEOS (you will need to have git installed):

cargo will start compiling the watchtower and it might take about 7~8 minutes in a poor CPU like Oracle Cloud's micros. After that, you will be able to run teosd or teos-cli from your terminal.

If you run teosd, you will get this error message:

Note that you will need to match some teosd and bitcoind options (e.g. the Network, RPC user, and RPC password).

Now when you run teosd from the terminal you will see:

Congratulations!! You have successfully setup your own watchtower and can go on a vacation knowing that your lightning channels are safe ;).

Send a test request to the tower using the following command:

You can use bitcoin-cli stop and teos-cli stop commands to shutdown bitcoind and teosd respectively. 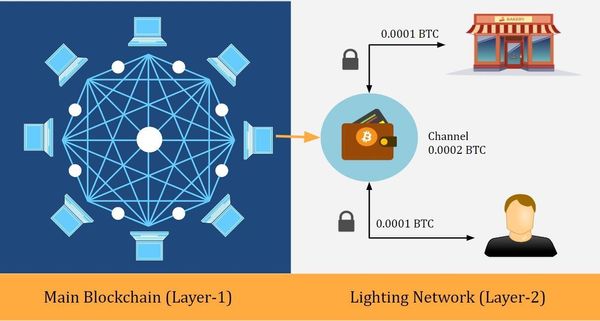 A beginner's guide to HTLCs in Lightning Network.